Villa Foscari is the only one of Palladio, along the Riviera del Brenta, and the first villa that you meet coming from Venice.

The Villa was built around 1560 by Palladio for Nicola and Alvise Foscari.
Palladio chose to build the villa in a narrow Brenta bend where the sailors were forced to slow down. And in fact it is positioned in such a way that it can be admired to the best. 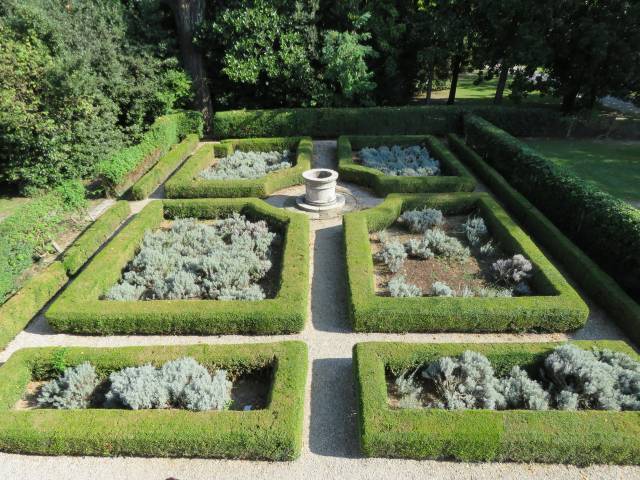 When you enter, the curiosity immediately takes you up the stairs to see the Noble floor (first floor, the only one you can visit) with its well-preserved frescoes.
The fresco decoration is mainly to G.B. Zelotti.A person at the entrance provides a small map of the floor, and is possibly available to answer your questions, and often also makes a guided tour of the rooms with illustrations of the frescoes.

The gardens of Villa Foscari in Riviera del Brenta

When you exit from the villa, explore the gardens.

On the back the villa is completely different.

The garden was rebuilt by the last owner based on Palladio drawings.
It is composed of several flowerbeds, a small maze, and long tree-lined avenues.

Around the complex are the ancient annexes of the villa itself, such as the barchessa and the greenhouse (not visitable).

Villa Foscari is also called “La Malcontenta” (malcontent) for a legend that says the villa was the place of exile for a lady Foscari because of her marital infidelities.

This little gem is also

reported by UNESCO as part of the World Heritage.

Information for the visit of  Villa Foscari in Riviera del Brenta

Villa Foscari is 2 km from the agriturismo Ca’ Marcello, and you can reach it taking the direction of Malcontenta. At the turn leading to the village you can see a narrow street (Via dei Turisti).
At the end of the stone road there is the entrance gate to the villa. Ring the bell and wait for someone to open (sometimes you have to wait a few minutes).

Opening hours: Tuesday and Saturday morning from 9.00 to 12.00.
On the official facebook page of Villa Foscari La Malcontenta, there are other opening hours updated every week.
Enrance fee: 10,00 euro

Other things to see in Riviera del Brenta